Introduction of “E series”
E = Edison Screw
Exx = the diameter in millimeters, even in the U.S., where the bulb glass is listed in  ighths of an inch.

E10 bulbs are common on battery-powered flashlights, as are bayonet mounts  (although those are usually held in with a circular flange located where the base meets  the bulb)

The E11 base is sometimes used for expensive 50/75/100-watt halogen lights in  North America, where it is called the “mini-can”, and tighter threads are apparently  used to keep them out of E12-base nightlights and other places where they could start a fire.

Large outdoor Christmas lights use an intermediate base, as do some desk lamps and  many microwave ovens. 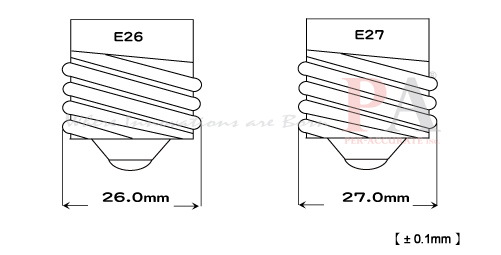 The large E39/E40 is used on street lights, and high-wattage lamps and many  non-incandescent high-intensity discharge bulbs. 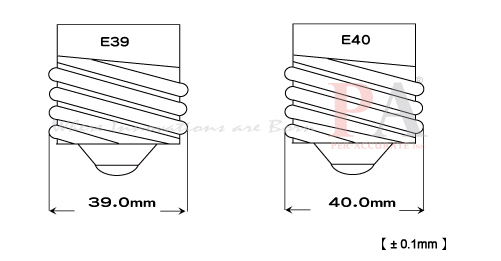 Christmas lights use various base sizes:

E17 for C9 bulbs, E12 for C7 bulbs, possibly E10 for some decades-old series-wired sets in the U.S., and an entirely different wedge base for mini lights.

In countries which use 220–240 volts AC domestic power, E27 and E14 are the most common sizes, although the bayonet mount is also used. In 120-volt North America and 100-volt Japan, the standard size for general-purpose lamps is E26.